My little angel baby is turning 2 in two and a half weeks. I can’t even stand this. On one hand, of course it’s cool she’s so much more independent. She’s talking, she’s running/climbing/jumping. She’s splashing and eating and following directions.

But i miss my little punkin head baby girl. The little sweet cherub that would nap on my chest. Nap until her sweat and drool pooled onto me and i worried about her drowning herself right under my nose.

That sweet sound of babbling and cooing. Pre “No!” and “Idonwanna” and “No, go away!” (Mostly reserved for her brother, and only me when she thinks she’s being funny)

I miss the fun of dressing my little girl and putting bows and headbands on … before she knew better than to tear them out. Before she understood if a Sesame Street character was on the clothing or not, which, in turn, determined whether or not she would wear it.

I just miss her being a baby. Small enough to hold all the time. And i did. All. The. Time. At one point my husband started asking if she had been put down at all during the day. But i knew. I knew with my second how fast it would go and i didn’t give a rat’s ass if the laundry piled up, or the dishes were getting out of control. I knew that first three/six/10 months would fly by and they did. And even if i was lobotomized in my sleep and woke up wanting another kid – which will never happen – it will never be her. If ever i had another baby, it would not be either of my two kids as they were babies, it would be a new being.
The only baby craving i get is wanting to revisit that time with my current kid. My son was a colicky infant who had a correctional helmet on from 3-6 months of age accompanied by physical therapy. I would love to have that time with him without all the hooplah. Just to enjoy my little monkey as an infant again.

This morning he and i sat and cuddled for about 20 minutes on the couch before anyone else was up. It was so nice. He never let me do that when he was younger. He was never a cuddler. But this morning we talked and giggled and i tried my hardest not to let him see me get all teary-eyed. I got to tell him how much i love him and always will. Those moments make the tantrum-filled argumentative moments a little more tolerable.

My punkin’ head is my last and youngest, so it’s always bittersweet when they have a birthday, hit a milestone, etc. The thing i learned with my son is to not take for granted the pre school and kinder years. It’s easy to let days and weeks go by without snapping a photo or video because afterall, they aren’t babies anymore. But oh, how i wish i had taken more videos of my son when he was three. Even four.

Understandably, i was just in a daily fight for sanity with him between the parent meetings with teachers, the tantrums, the transitions. .. but still. To have caught an extra momentary golden moment would have been nice.

My daughter has always loved Sesame Street and recently has been fostering a pretty healthy Muppets obsession. Muppet Treasure Island is viewed at least once a day. No longer in it’s entirety, i have noticed. After a couple weeks of that, i broke down and got a used Muppets Take Manhattan, just for a different soundtrack. This is all going to make for a very eclectic mix of party theme. Especially because it seems you can only get Muppet party supplies in the UK.

I’ve celebrated each of my son’s birthdays with excitement and optimism that a-it’ll be an easier year and b-that he’s growing into his attitude and vocabulary.

For my daughter, this will be the second year that i wish i could keep her this small just a little longer.

So, my fellow parental warriors, hold onto those little demons/angels/sheriffs/and cherubs. Get out your camera, phone, polaroid, or web cam and snap/record away. *This* is the youngest they will ever be. When my kids are graduating from high school and i want to relive the good snippets, it sure will be nice to have one more video to study and weep at 🙂 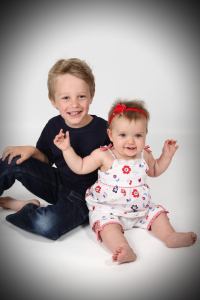