My son has had an interesting road of construction. He was born with one neck muscle shorter than the other. We didn’t notice this until about 2 1/2 months when his head began to look misshapen. The term for the shortened neck muscle is torticollis. Because of this, when he was put in his swing or car seat each time, it contributed to his plagiocephaly – the flattening/symmetry of the head.

So at three months, along with colic, we got to put Mr Gage into a giant hard helmet that hid half his head from kisses and snuggles. This was my introduction to navigating the insurance waters. .. and greedy doctors. It took a second opinion to find an office that would allow insurance but we needed the ever-important “medical necessity” label to get it.

So we finally got him fitted

They take a cast and send it off. A week or so later we get the helmet. 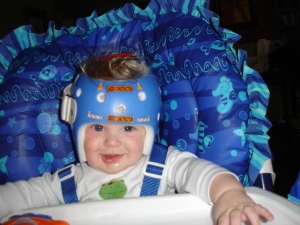 I’m not sure now what the exact time frame was. I believe he began in October, so he was about four months old. We had to give him a punk rock haircut so it was buzzed around the sides and back to reduce the oils and sweat. He had to wear this 23hours/day. Only one hour out of it.

So after nearly three months of physical therapy every week, helmet fittings every week, and lots of stinky head kisses, we were finally done!

So as you can see, he always kept his little jaw tilt, but his head shaped nicely.

Now, nearly 7 years later, we are entering into a whole world of orthodontic issues. Partly due to these early issues, but also would have had issues anyway. We are having to stretch his jaw and open it up, and then re-align his jaw.

This is all going to cost a small fortune. Thankfully we have insurance, but as standard, it’s only covering a painfully small part of the overall cost.

So here’s his latest x-rays. I’m sure you’re all dying to see them. But when i start to think the dentists are snake oil salesmen, i see this and it’s pretty plain to see there’s just no room in his small – but mighty – mouth for all his chompers.

So over the next 18 months or so we’ll be correcting even more of my little monkey’s face. I was so proud of him at the appointment, though! He didn’t have any issues getting x-rayed and measured and poked and prodded in the mouth. And when they sat down to talk to me about all the metal that’s going to go into his mouth, he asked very reasonable and smart questions.
He may be a work in progress, but the end result is going to be one amazingly handsome, smart, feisty, unique human being! … despite my worry sometimes he has been abducted and replaced by razor-fanged, fire-breathing, shrieking banshees. I at least now have evidence there are in fact no razor fangs.

One thought on “Construction.. still”