So it seems our town has a rather cool Big Truck Day every year. It’s a hit with all the kids, but the boys especially. The only hang up with this thing is that you have to register for it like it’s a class. A very expensive one day class. I slapped it on the calendar for our Club and warned everyone pre-registration is required through the city.

Then i went to Disneyland.

Then my kid decided to get croup.

Then I had school shopping to get done before the ‘meet & greet’ yesterday.

Sometime early this week i realized, “Shit. I haven’t registered.”  So i registered.

I got the big F-U finger in the form of “waitlisted” and made other plans.

First i told my kids we’d go to the Aquarium. They were excited. I went to bed imagining the tolls involved, the long drive into Seattle, the paying for parking after finding parking, the every direction they each like to go in when we’re there, and the dreaded Gift Shop the Aquarium dumps you out into.

So then i remembered we haven’t been to the much more subdued and closer KidsQuest museum that is located in a mall, near an Old Navy. School shopping AND an afternoon of busy kids?! SOLD!

So i talked them into trading the aquarium for this instead.

Then my friend tells me that actually she IS pre-registered, but not going to the Truck Day, and can i please take her place.

…. well, i have two kids and this only is a guarantee that one can get the “goody bag”. We all know how it goes if one has one and one doesn’t.

The fires of hell rain down on your head.

Taking her place and going ordinarily wouldn’t be a big deal, but here’s how my last conversation went with an employee of the parks & rec dept.

“Hello. I pre-registered my kids but was put on the waitlist. How does that work for this event?”

“Really? But i did register online. It just happens the ‘class’ is full, so i was put on the waitlist.”

“That makes no sense. Pre-registration is $15, you want me to just show up and pay $25 per even though I filled out the info beforehand?”

“So do you even have a waitlist?”

“Ok, so you know that makes no sense, right?”

So on principal, i was not going to go BuuuuUUUT i had an opportunity to just check it out. Fine.

So this morning i call the Parks dept back.

“Hi. I am taking the place of a pre-registrar, but I need to purchase one day of ticket. I was told there were 50 spots left, can i register over the phone now before the event?”

“No. You have to come down and do it in person. Sorry.”

“Ok, what time will you begin accepting people?”

…. fair. how is this fair? i’m trying to be proactive. first come first serve is pretty self-explanatory. why would you want to create a mob on purpose?!

Up until now, i’ve dealt with this office for multiple classes for my kids, and they’ve been great. It’s just this particular event that they have no effing clue.

So i get the kids ready. I fight a pounding headache despite the constant chatter and bickering and teasing. We go for an early lunch at Panera. I’ll leave that for another story.

We show up to the park at 11:20 and the parking lot is nearly full already. Holy cow. I’m glad i came early!

We walk to the table to register and Ned Flanders greets me with nearly a “Hi Diddledy Ho!”

I recognize his voice from the phone conversation this morning.

“Can we go ahead and register for the day of?”

“No. We aren’t taking anyone until noon just to be fair to everyone. There aren’t even trucks here yet.”

…. as if the location or presence of the trucks was even a factor

“Nope, just come on over when it’s time.”

Does this make sense to anyone else?!

Another woman came up with her kids. She was actually a pre-registerererer, though.

“Hello, so can we go ahead and get our wrist bands then?”

The woman and I looked at each other like, “Is he serious?”

After the third person was told this same thing, i finally said, “You might want to have a line form so there’s not one giant mob climbing over your table to get in.”

“Well *chuckle* i’ve been doing this four years and there’s a mob either way.”

… right. But there’s organized, and then complete chaos. Which one makes sense?

oh wait.. nevermind. I’m trying to reason with a man. I gave up and just formed my own area nearby. Others followed. Pretty soon Ned Diddledy Dee Flanders put up two signs designating Pre and Day of lines.

Finally after long sweaty irritated lines formed, someone gave him the invisible silent ‘ok’ and he began accepting people “early”.

He was very proud of his forward thinking.

The kids were jazzed to climb, honk, button push, climb down, cut in line, hog the driver seat, and honk some more. My son, however, is not a fan of loud noises, so he tried climbing in and out of each truck with his elbows. His ears were covered for 85% of the time allowing him only the assistance of his elbows like some poor elementary school VFW amputee. 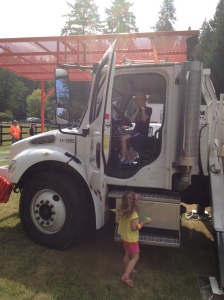 Notice, if you will, he is still honking. He has told every kid we’ve approached to “stop it” when they do it, but he’s the first do smack the center steering column as soon as he’s able.

He was wary of the honking noise, and had his ears covered until he got in the Police Car. Once his little tushie was in that seat, he was HOME. He was born to be a sheriff of a (very small) town. Where he wont ever have to pull a gun or fire it. He was so giddy at first he was almost bashful. Then he found the intercom-ish radio thing. He was barking orders to the crowd quicker than you can say Krispy Kreme. Then he wanted the lights on. Then he had lights on, orders barking, and that’s when the Officer came over and turned off the loud speaker.

Yes, that was my kid taking it too far. I blame it on his dad. In about 20 years the kids here today are going to have a flashback and strange sense of deja vous one night when they’ve left the bar and a police car pulls up behind them flashing lights and an unintelligible “dlkjsd=-s(&*” is shouted over the loud speaker.

So after an hour and a half in the hot humid loud sticky field, we packed it in and headed home. All in all a great time, and i’m glad I got to see him be a kid for a little longer before 2nd grade turns him into a back-talking, reading, writing, smarter-than-mom little snot.

Oh wait.. have i already done this?  Looks like my summer homework is complete. Teachers: You are welcome.