My Tweets
Posted on September 6, 2013 by sarcasmica

Today i get to write about my daughter! She cracks me up constantly and she is such a source of joy. So I punched her in the eye.

I was trying to get her dressed this morning. She was being a pre-three year old and resisting and playing and being goofy and doing anything BUT what i’m trying to accomplish. I sat down on her toddler bed. I grabbed the shirt i wanted to put on her. She was spinning around. She leaned in to throw a barrette beside me as i reached down to get her night shirt off and WHAM! My knuckle went right to her eyeball. Knuckle to socket.

She waited a second. I realized what happened and tried not to freak out.

Then she began to cry. Understandably.

I asked to look at her eye and she says, “You punched me in the eye!!”

After seeing she was ok, i tried not to laugh about it. I scooped her up and kissed and hugged her and told her i was sorry. We moved on.

All morning I kept waiting for CPS to jump out from behind a tree and arrest me.

So tonight, i’m putting her in her jammies and she just says, “Why did you punch me in the eye?”

“It was an accident, honey. I didn’t punch you.”

i haven’t laughed that hard in days! my 2 year old is dancing around like mini Mohammad Ali, zapping her hand toward me, frowning her little faux-frown and saying, “You want a knuckle sammich?!” 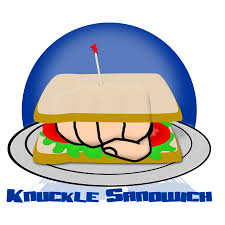