Apparently my daughter has spent the last four months of being 3 practicing and plotting for the real unveiling of THREEDom. As of last week this very well-slumbered child decided everything in her room suddenly takes on scary shapes and sounds. Actually, it happens throughout the day at inconvenient times. Like the imaginary Gargantuan face-eating spider lurking behind the bathroom door ONLY when it’s time to go potty before we need to get appointment, or bedtime, or quiet time. Just to be certain it isn’t there, she also questions if there is a web.

However, when she decides it’s time to play Hurricane, she’s happy to scoot in there and drench her clothes and hair and floor without telling me it’s time to play. I don’t know if this is a random hibernating spider or what. Its time to talk about theories and holes in the logic.

At bedtime all the shadows become fingernail pulling, toe chomping monsters. However, when it’s time to put on PJs at night, or get dressed after waking up, the room is the only universe her legs will work long enough to hold her body up.

So what this has meant for me is that my daughter, who has slept no less than 8hrs per night since 11 weeks old, has now figured out it’s fun to play “which personality will mommy bring to my room if I wake up screaming for her at various hours of the night”.

After a week of this game, we must have reached the end of the rolodex because last night, finally & blessedly, she slept through the whole night. … i think. Either that or I was finally so tired I completely tuned her out.

I was happy until I realized what the trade off was. Epic meltdown at dinner time.

The other fun game we are now playing is “which food will set off the THREEdom monster tonight”? My daughter -in her previous and unpossessed life- ate like a Champ training for a big match. Now, i’m beginning to think the mere act of sitting at the table with a plate in front of her is the main offense. It all goes downhill from there.

So my angel is now like every other toddler on the planet. This too shall pass and evolve… into F-ing Fours and Frightening Fives. Then and only then will I get to see the shimmering oasis of the promised land: Elementary school. It’s nothing my son didnt already train me to handle. I’ll just have to rebuild my booze tolerance!

(Here’s a post-time-out pic. Notice the “Calm down jar” amidst the chaos? Fat lotta good that thing has done) 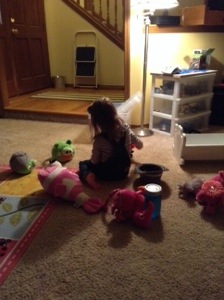