Aliens have abducted me and replaced me with an emotional twit.

Ok, maybe that’s a bit harsh. It’s becoming ever more apparent that I no longer have babies in my house. I haven’t for some time, but it’s glaringly obvious to me.

Don’t get me wrong. It was our choice to stop after our daughter, but still… it’s an ever adjustment. A mind tweak, if you will. Up until now it’s been a small scale realization. “She’s getting so big!” “She is doing ____ on her own?”  “How did she reach that?!”

She’s getting so much bigger that it’s gone beyond the small scale and developed into a full fledged reality. I took my daughter to a mall last week. First of all, let me just say normally she isn’t keen on leaving the house. She has learned to associate the word “mall” with “fun and toy-opportunities”. So all morning it was, “Are we going to the mall yet?”  “Are we leaving for the mall now?”

Then we had the stroller debate. I asked, “Do I need to bring the stroller, or are you going to walk?”

“I want the stroller.”

“Really? You aren’t going to just walk like a big kid?”

And I cheated her. She’s a big three year old. So much so that I felt I needed to make a sign to post on the stroller saying; “I really am 3, don’t judge my mom.”

She was a pretty ridiculous sight with her legs and feet hanging down to the ground and her head far higher than the headrest. It’s not her fault she’s a giant kid. Does that mean she doesn’t get to continue to reap the rewards of toddlerdom i.e. riding in a stroller and letting someone lead/push/pull take you anywhere so long as you have your trusty snack tray and spot for your favorite toy to ride along beside you.

We went to the Lego store to get her her very own Lego Person since her brother is beyond being able to share his right now. She had a blast at the building stations while I looked around the store. This Lego store was right beside Build-A-Bear and she didn’t even bat an eyelash when we didn’t go in.

We spent nearly an hour building with the blocks, and she picked out and made three Lego people on her own. It was great!

And then I began feeling like this is it. No more babies. No more small kids that I have to pack a mashed and diced lunch for. I rarely even take an undie & pants change of clothes with me, for cryin’ out loud! We went to the playground and I watched all the nervous moms with the toddling new walkers and felt a mix of emotions. The first of which was “whew! glad I’m not there anymore!” (especially when I saw a full saggy diaper run past me) and the second and third emotions were “aaaawwwwww”

I don’t exactly know how to describe it other than body snatchers.

I was speaking to my husband a little bit about it this morning. A little bit. Do men really ever get it? The whole nurturing, sweet, baby smell, after bath shampoo inhalation, kissing chubby baby feet thing. I suppose some do, but not mine. So I just kept it breezy and light. We talked about getting rid of the high chair, and the mattresses and the crib…. NOPE! That seemed to be my line in the sand.

The thought of getting rid of the crib they both used brought the blurry tears that I managed to suck back into my eyeballs so as not to a-create a scene, and b-freak out my husband who went through a vasectomy because I declared my DONEness with pregnancy and babies.

I instantly see my little toe-headed baby boy at 7 months bouncing on his feet as he stood up proudly with a giant grin on his face in that crib. Chubby hands holding onto the edge for dear life. The same edge his little baby teeth marks are forever indented.

My daughter who was such a great sleeper all bundled up in her ridiculously priced ladybug blanket and matching beanie. The ladybug sheets that framed her chubby rolly polly legs when she’d kick out of her swaddle. The flower stickers that managed to stay stuck after all these moves later.

“Not the crib” was all I could choke out over breakfast as we were ‘breezily’ considering a garage downsize.

I certainly don’t miss the stress and paranoia and anxiety of having a baby in the house. But I do miss having my babies once in a while. Those smiling, non-speaking, non-hitting or kicking, go-where-you-put-them babies who couldn’t get enough hugs and kisses days.

So for now, I’m claiming alien abduction until I can get a little common sense back. Until then the crib stays. 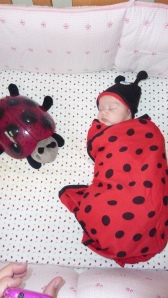