My Tweets
Posted on September 29, 2014 by sarcasmica

Last weekend was my birthday. My husband wanted to know what I wanted and if I were an easy wife I would have just said “Jewelry”. But nooOOOOoo I had to go and declare that I wanted time and not things. Boy did I get it !!

I have always wanted to go whale watching. Deep deep down beneath the layers of fat and carbs I am an animal lover. Jane Goodall was my hero when I was a little kid. The woman that lived with and documented chimps. It was amazing to me that someone would go up into the wild (the African wilderness) and just be with these wild animals. Whale watching was something fancy grown ups did in Southern California, and it was just something I figured i’d never get to do. Once we moved up here to Washington, Groupon has nearly a constant list of varying tours. I decided for my birthday I wanted a trip with my husband to go whale watching.

To his credit he did not roll his eyes in front of me. He did not snort or sigh, either. The fact that this was all agreed upon last weekend did not daunt us. Once we started trying to find available reservations for an overnight hotel, then we got worried.

In the end, we found the seemingly one single spot still available and it required a 2 night minimum stay. Oh darn. Away on a romantic trip for one extra night? Can we do it? Can we possibly suck up the misery of being away from the children for two whole nights?!?!

Hell yes we can.

The fact that there was a ferry trip involved in this whole adventure did not intimidate me. Afterall, my mom and I had taken a ferry a couple of times at this point and it was never an issue. I assured my husband the ferry ride was included in the estimated time outputted by the map thingy. An hour and 18 minutes. He had a hard time with this, but seeing as how the whole trip was supposed to take 3.5 hours, he conceded.

He was given some advice by a co-worker to get to the dock early. We got to the dock at 6pm assuming we could make the 8:55 boat. “Oh my GAWD, three hours?! What are we going to do for THREE HOURS?!” he wondered. Little did we know, it would not be three hours.

We were told at 6pm that the 8:55 boat was sold out and the next available would be the 10:30 ferry. My husband contained his aneurism. He remained calm. He asked the attendant, “Is there somewhere we can walk to to get dinner or kill some time?” The attendant helpfully informed us there is a little “cafe” inside the terminal station.

We parked. We played on our phones and tablets. We joked about the crazy scenario. We got out of our car and walked.

We made it to the snack stand a.k.a. “cafe” and saw all the pre-made sandwiches were sold out. Except for the vegetarian selection…. and let’s face it, it would take a helluva lot longer than this wait to make that happen. My husband asked the cashier what our options were:  “We do have more sandwiches in the basement, but haven’t had a chance to make a run for them. Or we have hot dogs. … but they wont be ready for another 20 minutes.”

hmmm… having to choose which form your food poisoning and dark-thirty diahrrea will come from is not a great start to a romantic excursion.

We chose the hot dogs since we could at least watch them roasting on the little aluminum wiener spinner. We considered a cookie from behind the plexi glass, but the flies hiding among the raisins convinced us otherwise. We were already living dangerously with the dogs. She offered us a couple of snacks and we opted for the cinnamon roll which was in a closed container.

Here was our first romantic meal of the trip: 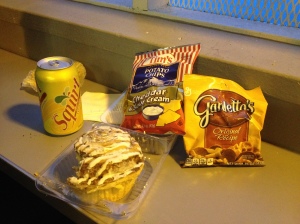 We kill another few hours and meander back to our car after canoodling under the orange glow of the terminal lights. 10:30 arrives and so does the ferry. We start up the car, eager to just move anywhere after so long waiting. We move three car lengths and everyone comes to a halt. After zero information given, and a cranky, late, irritable game of Telephone, we find out the 10:30 was over-booked and they had to add another ferry. A midnight ferry. Good news is it’s totally empty so we will all fit, and it will be a direct trip to the island.

So from 6pm until 12 midnight we waited for a ferry. We boarded and didn’t get to the island until 1:30am.

The thing that kept us going in decent spirits was : At least we didn’t have the kids with us because let me tell you. We saw I don’t know how many poor bastards lugging their children up and down the rows of parked cars. Back and forth to the tiny (and at one point out of order) bathrooms and snack stand running on chips, fly-eaten cookies, and soda.