I learned a few things on my family vacation to Orlando.

Never evereverever fly into Salt Lake City, UT. Unless you like to simulate terrifying zero gravity jet drops and side to side dips and jerks. Then it’s all ok.

There was a poor woman with her three children in the row across and back one from me sobbing. Her kids, were having a great time screaming and “aaaaah” ing with the other kids on the plane until they noticed their mom with her hand over her mouth and tears streaming down her face from her terror as she was gasping for breath between sobs.

The plane felt like it was being tossed around by giants.

We had to circle for 40 minutes until an attempt could be made to land if and only if the winds shifted. They shifted. They shifted all over and under the wings. We did make it down, but the airport was utter chaos. Most flights were delayed, gates changed, planes re-routed. Cray-zay.

Another tidbit I learned; No matter the hotel you are staying in, always check under the sofa cushions.

We had our daughter sleep on the sofa – over a sheet – the first night before actually having to assemble the pull out bed. I found a wrinkled, dried up kid’s sock behind one pillow…. no biggie. The following night I pulled the seat cushions off to fish out the hide-a-bed and found black mold looking stuff on the material under the seat cushion. Curious. I reached for the handle to the frame and saw it. A black, smooshed, rotted, squished fully disgusting banana.

This very well could have been left from Planet of the Apes times, it was so old.

And my kid… my dust-allergic, croup-susceptible, four year old slept on top of the moldy pillow that smooshed this once-fruit into annihilation.

Momma was not a happy Mouse. 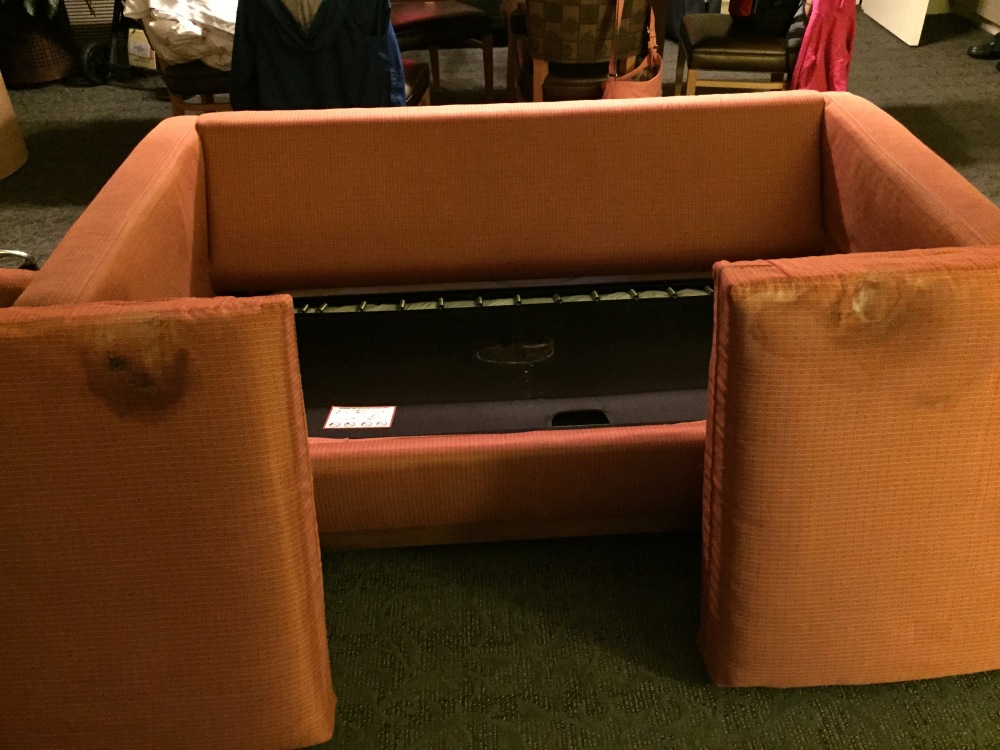 Another valuable lesson learned for me was “fun” takes on different meanings for everyone. I happen to love roller coasters, going fast, the more dips and spins the better. Upside down? Take me! Barrel rolls? Sign me up ! Big huge drops? Strap on the parachute!
My son. My sensory-overloaded, sound-sensitive poor dyspraxic child finds nothing fun or exciting about having his senses bombarded with the noise, the heat, the sweat, the speed, the tracks, the uncharted territory that makes up an amusement park. But like all the other parents at the park, I would force “fun” down my kid’s throat if it was the last thing I did, so help me God! You WILL enjoy yourself, damnit !!

But seriously, have you ever looked around at (in this case) Disney World? It’s all a bunch of adults who can afford to take themselves to Disney finally.  It only took thirty years, a career, and a mortgage loan to get there. Once you finally can afford a Disney vacation, lo and behold, you’ve got children! These children will have to go to said park with you and your wife, of course. Will they like it? Absolutely! They watch Disney/Disney Jr., right? What kid doesn’t want to stand in line for 45 minutes in 90 degree/98% humidity weather to take a picture looking into the sun next to a teenager in a hot, airless costume?!! Come on! It’ll be fun!! 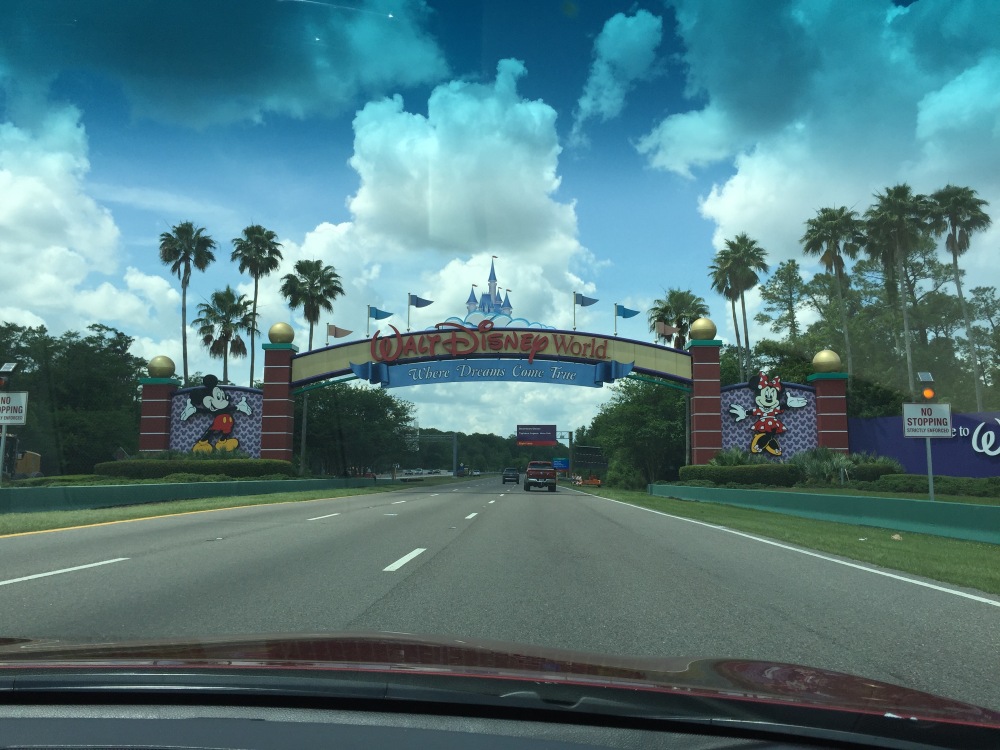 These vacations are for the grown ups. Someone threw the ice cream trolleys and churro stands on the park walkways to help bribe the kids through the trip.

So I had to have this conversation with my son after terrifying him, purposely, by forcing him on a kiddie roller coaster:

Scene: You’ve just sold a ride on a small kiddie mini roller coaster for 20 minutes of minecraft iPad time at the hotel later to your sensory-overloaded 8 year old. You both board the ride, sit, slap down the lap bar.

He is already covering his ears before the train leaves the station.

You head up up up the first climb. He is now gritting his teeth. From the first zippy down slope, he is baring his teeth, covering his ears, trying to make his body fold into itself. The first quick turn causes him to emit a scream you haven’t heard since One Direction performed at a girl scout cookie convention. … but not in a happy way. In a terrified “I’m going to shit my pants now” way.

You exit the coaster together and immediately get yelled at by the boy who is unbelievably angry. … rightfully so.

“Oh man, buddy, i’m so sorry that you couldn’t enjoy that. I thought it was so much fun!”

“It was NOT fun, I TOLD YOU I wasn’t going to like it. It was TOO FAST!” (he says with red eyes, both feet stomping on the exit ramp, and steam coming out of his ears and fire from his mouth)

“I’m really disappointed.”  (as a mother, this is the WRONG thing to say, but you can’t stop yourself.)

dejected and sad, he looks at you and simply says, “Disappointed? In me? Why are you disappointed, mom?”

“I’m not disappointed in you. I’m very proud of you for even trying it. I’m just sad that I feel like something so fun for me can’t be shared with you. I feel like we are missing out on an opportunity to really have fun together as a family. To experience this together.”

This thing you love to do, you rarely get to do, so many people want to but can’t do, you are doing with both of your kids and your husband, but one of the kids simply cannot enjoy it. You have to let the assumption and the ideal go that this will be something amazing and thrilling and bonding. There are moments that are fun. There are a few things he will like, but it’s not the same. It’s one more thing that makes him different than you.

… and then you eat a Mickey ice cream sandwich, and you move on with what is enjoyable. 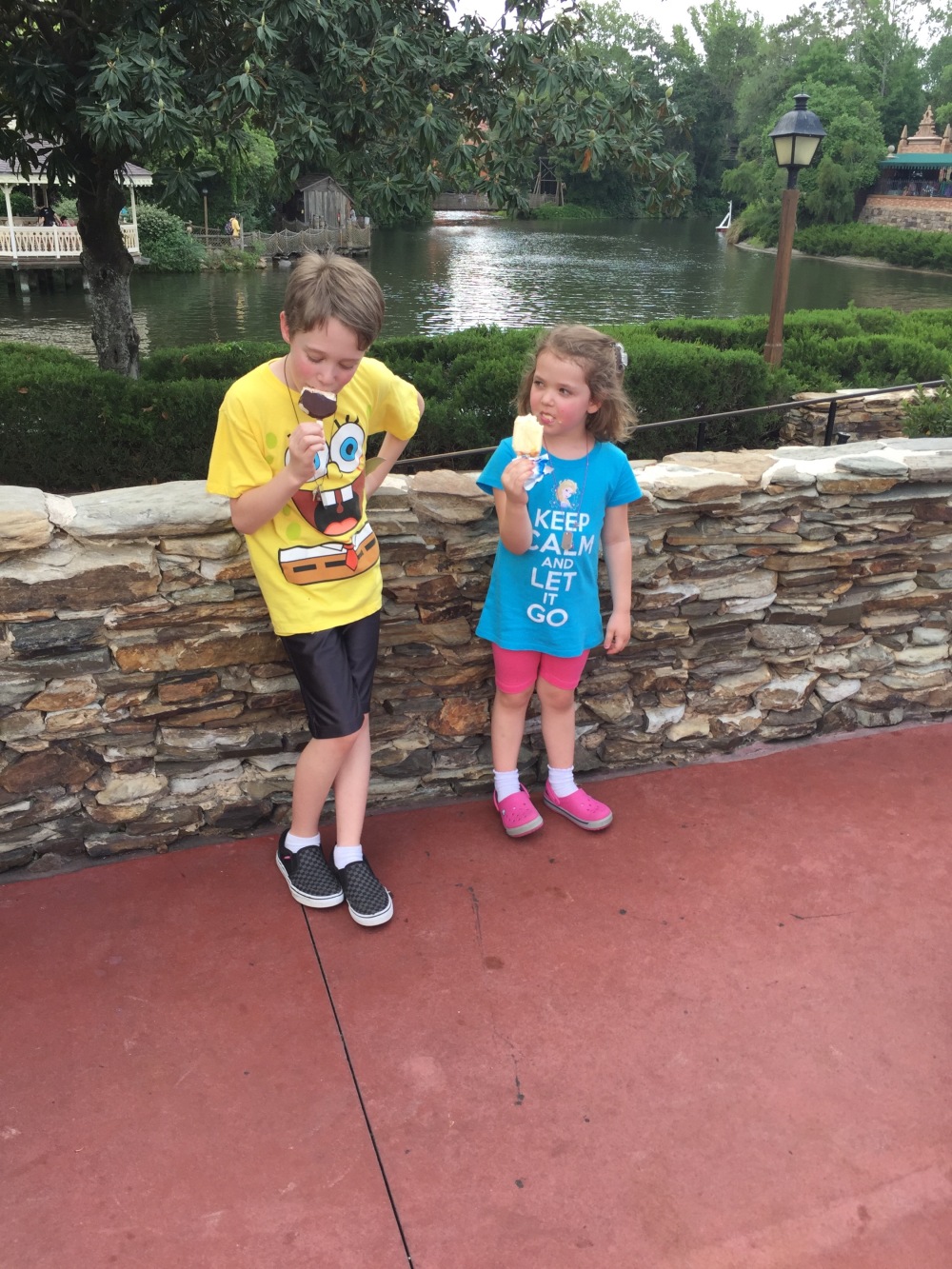 My four year old was the ride champ. She will be my dare devil. There is no ride too scary for her. (that we allowed her to try, that is) She went on Transformers three times. She did Spiderman twice, Gringott’s twice, Pirates, Dumbo, etc etc etc.

She was rarely afraid. Haunted Mansion freaks her out a bit. The roller coaster at Universal her brother lost his mind on started out fun, but once he finished berating me and shouting about how fast it was, she convinced herself she didn’t like it… but in actuality she loved it.

One hilarious experience i’m thankful we shared was the Bilge Rat Barge ride at Islands of Adventure. (Universal) It was the last ride on our last day. It is a white water rafting ride where you sit in a circle and get completely drenched.

My daughter hated it. She got the first wall of water on her head and from then on she just kept her head down and didn’t get to see what we were really doing. At the end of the ride I said, “Did you like it?!”  “NOOOO!!! I’m SOAKIN WET!”

But the difference is she was able to get over it instantly.

Over all, it was a wonderful trip. I hope to always remember it, and I hope my kids will talk about it and remember it fondly. My son ultimately enjoyed the hotel pool miles more than any of the parks, but as a family experience, it rocked. We only had one night of puking, thank goodness, so all in all it was a raving success!

(as a side note for anyone visiting an amusement park with a challenged kiddo, there are passes available to make this enjoyable for everyone. In my experience Disney and now Universal Studios also offers this pass)

2 thoughts on “Thrills and Chills”