I volunteer at a parrot sanctuary 2x/week. I love it. It can be a total mind trip, but for the most part it’s been a dream. Combine this hobby with my new one, photography, and I just can’t help but share. I’m a sharer. A shareologist. A Sharing McSharePants.

Here are some fun stories of the crazies I get to work with.

This is Kepler. Kepler is a talker.He’s been at the sanctuary since around December, I think. He likes to talk about food, so naturally we are buddies. He bit me once when his favorite (and 90% of the birds’ fave) volunteer came into the room. I guess he wanted to be available for the other person because I dropped him right back onto his perch after that, thankyouverymuch.

Recently he’s been in a room with the other Greys. There are mixed feelings about this VERY social bird going into a room with *gasp* other birds. Kepler has had a realization that he is not, in fact, a spoiled prince. He gets taken out quite often still, though. Last week I was in the room talking to him and my first fave, Beeba: 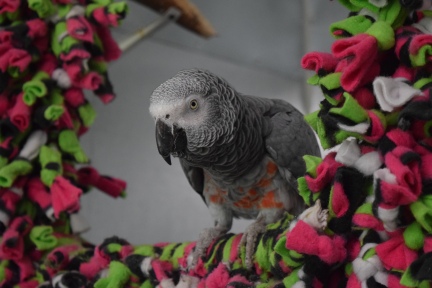 Kepler did his usual foot pop to ask to step up (onto my hand) and I obliged him. My mistake came in either showing up with a haircut and new highlights, or in not immediately going to the door because the stinker bit me. Not too too hard, but enough for me to react. I offered him to step onto my other hand and then he REALLY bit me. So much that I had to drop him, turn toward the door, he flies back up to his perching area and says in a sweet lady voice, “Buh bye.”

I left to nurse my injured pride. When a bird bites you, there is adrenaline. It hurts. Especially when you had trust in that animal. Granted, if you work with them there is always respect for what they can do. You have to understand that there is no such thing as a bird that doesn’t bite. There are birds that predictably bite, or birds that bite less often than others. This was my reminder.

I was there today and bit the bullet, so to speak, and picked him up again. I try not to hold grudges and I don’t like being afraid of them, so I pulled up my big girl granny panties and asked him to step up. (after I spent some time just scratching his head) He did. I went for the door and just hung out with him in the hall. I sat with him on my knee and scratched and talked with him. When it was time to go back, he was less cooperative, but didn’t make any moves to bite me. WHEW! I was trying not to sweat and shake when I had to push my hand into him to get him to step up to go back to the room. He was a gentleman, though, and fully cooperated at that point. Hopefully he will be equally gentile tomorrow.

Another guy in this same room named Tucker is out for my blood. He mostly likes men, so I have that offensive quality when I walk into the room. He’s bit me once, pierced another volunteers nose, and generally just glares at me when i’m in his vicinity. I first realized who this bird was when, early on in my volunteering, I was feeding and he popped his foot up to step up. I tentatively offered a finger and he immediately bit down hard and latched on. I had to shake him off, he falls to the floor and begins cackling at me. “Ha hahaha!”

Tucker also likes to take on a gravelly grumpy old man voice when I walk towards the door and say, “GET OUT!” as often as possible. I take no offense. The feeling is mutual 🙂