Not sure how birds became a big part of my life, but here we are. I have two of my own after spending nearly 3 years volunteering at a giant Parrot Sanctuary. I never brought home one of the big guys, but I did end up rescuing two cockatiels.

As all of our lives have come to a screeching halt, I have rediscovered what I once enjoyed. Taking pictures of birds. Admittedly, I’ve never had to work very hard at it. When I did it for the sanctuary, I was in rooms and aviaries of captive birds. I did not have to go traipsing in the wilds of Brazil or Peru to capture macaws.

When I went to the Woodland Park Zoo or Point Defiance Zoo, that’s about the maximum planning and travel I have ever managed to photograph wildlife. I have to admit that I do really love it. I like capturing the funny moments. The expressions or behaviors that are out of the ordinary for the species. 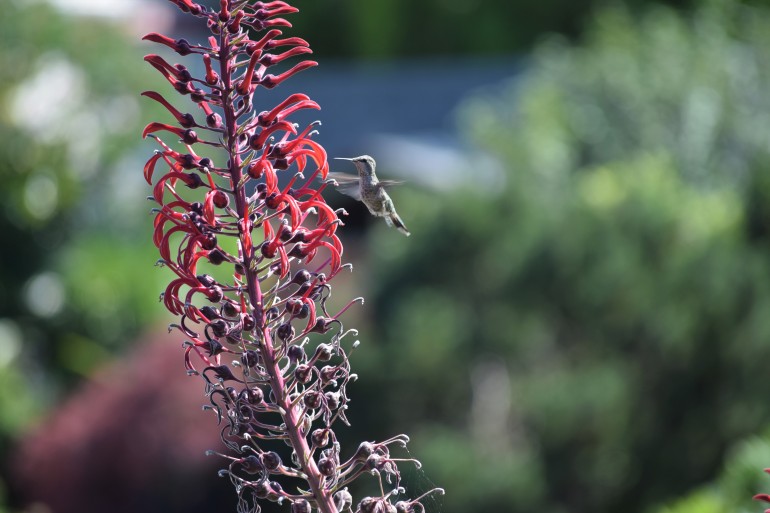 Now since I can’t actually go anywhere or do anything, I have started sitting on our back deck and trying to identify and photograph my backyard birds. The biggest challenge is keeping my children and dogs from scaring everything away …. which is a constant threat.

This morning, Easter Sunday, I was out soaking in the sunshine and patiently observing whatever I could. I noticed after about 20/30 minutes, the already slight chatter decreased to nearly nothing. At one point I saw a crow chase a Stellars Jay away from a tree, then saw in the far distance a giant dark bird with light at the head and tail… it was a Bald Eagle!

Growing up in bustling, crowded, loud Southern California, the only wildlife we saw was seagulls, pigeons and Mall Rats. Washington has been aaaaaaaahhhmazing for wildlife – specifically birds. There are owls, hawks, EAGLES. All kinds of cool feathered flocks.

So I see a silent soaring bird in the far distance and then it disappeared… about five minutes later it circled closer, though still incredibly high up and there was a mate! Two Bald Eagles circling relatively nearby! At one point they playfully swooped at each other, did another circle and then split up. The amount of geography they covered in one circle was unexpected. I had the pleasure of getting pictures, but even with my maxed out stock 200mm zoom, this was the best I could do. 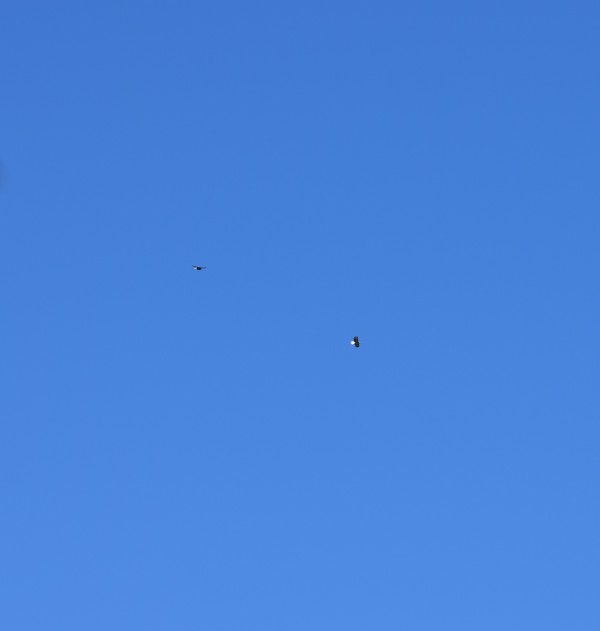 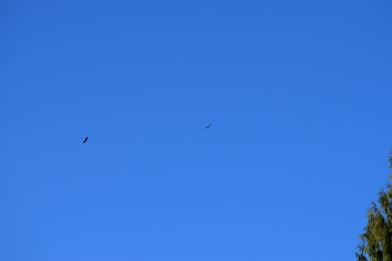 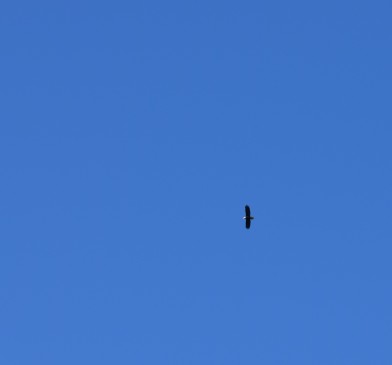 I had to leave the backyard and go to the front of the house to see if I could follow them and get a closer shot… I couldn’t. When I got to the back deck again the birds were still quiet, and when I looked up I saw a very tentative hawk come out of hiding. It was definitely a fantastic show of Nature’s hierarchy of predators today. Thankfully I didn’t witness any take downs, but gosh was it a lovely morning for an amateur backyard birder!